What To Expect From a Cocaine Addiction Treatment Program Near You

Asking for help with cocaine addiction is a huge first step towards recovery. Once a person admits they have a problem and need help, the next step is to enroll in a cocaine addiction treatment center in New Jersey.

Treatment for cocaine abuse and addiction involves detox, therapy, and peer support. Even though the physical withdrawal symptoms and drug cravings are difficult to overcome, drug rehab programs greatly increase a person’s chance of getting sober and staying sober. 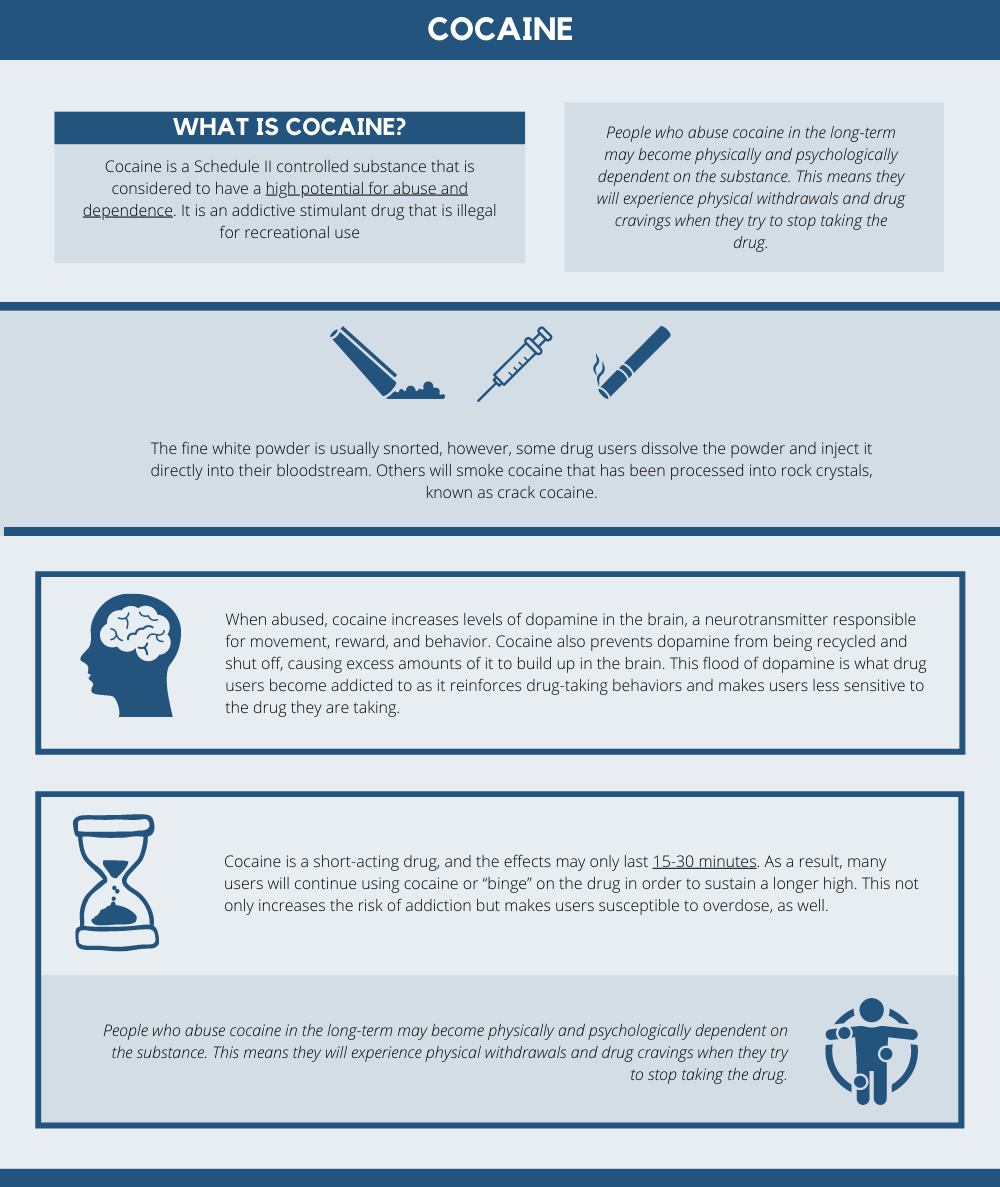 Cocaine is an addictive stimulant drug that is illegal for recreational use. The fine white powder is usually snorted, however, some drug users dissolve the powder and inject it directly into their bloodstream. Others will smoke cocaine that has been processed into rock crystals, known as crack cocaine. Regardless of how a person abuses the drug, taking the drug repeatedly within a short period of time can lead to dependence and addiction.

When abused, cocaine increases levels of dopamine in the brain, a neurotransmitter responsible for movement, reward, and behavior. Cocaine also prevents dopamine from being recycled and shut off, causing excess amounts of it to build up in the brain. This flood of dopamine is what drug users become addicted to as it reinforces drug-taking behaviors and makes users less sensitive to the drug they are taking.[1]

Cocaine is a short-acting drug, and the effects may only last 15-30 minutes. As a result, many users will continue using cocaine or “binge” on the drug in order to sustain a longer high. This not only increases the risk of addiction but makes users susceptible to overdose, as well.

People who abuse cocaine in the long-term may become physically and psychologically dependent on the substance. This means they will experience physical withdrawals and drug cravings when they try to stop taking the drug. The best way to treat dependence on cocaine is to seek help from a cocaine addiction treatment program in New Jersey.

Before someone can begin a drug rehab program, they must first properly detox. Cocaine withdrawal, however, is typically not life-threatening as the symptoms are mostly mental rather than physical. As a result, some individuals may not need to go through a medical detox program.

Depression and cravings can last for months after a person stops using cocaine. Patients should enroll in a long-term treatment program so they can learn to cope with these symptoms and stay sober.

Cocaine addiction is a complex disease that causes changes in the brain as well as problems in one’s social, familial, and work life. Addiction can also affect thought processes and decision making – even for months after a person is finished detoxing. As a result, effective treatment programs take a multi-disciplinary approach consisting of medication therapy, behavioral counseling, and support groups.

Unlike opioid dependence, there are currently no medications approved to treat cocaine abuse and dependence. However, researchers are testing a variety of different pharmacological approaches, most of which target neurotransmitters like dopamine, serotonin, and GABA in the brain. Other approaches being explored by researchers include a cocaine vaccine that may reduce the risk of relapse or using disulfiram, a medication previously approved to treat alcohol addiction, to prevent relapse.[3]

Even though there are no FDA-approved medications for cocaine addiction, patients may be prescribed medications to help cope with their symptoms during detox. For example, propranolol, a beta-blocker, may be used to help patients cope with anxiety, hypertension, and other severe withdrawal symptoms.[4]

If a patient is diagnosed with a co-occurring disorder, such as depression or bipolar disorder, they may be prescribed medications accordingly. Using medication to manage mental illness is an integral part of recovery for patients struggling with dual diagnosis conditions.

Behavioral therapy can be held in an inpatient or outpatient setting, however, inpatient rehab is recommended for patients with severe addictions to cocaine. There are many different types of behavioral therapy, so each person’s treatment plan should be customized to meet their specific needs.

One form of therapy that is particularly helpful in treating cocaine addiction is contingency management (CM).[3] Contingency management is an approach that uses a prize- or reward-based system that celebrates patients who abstain from drugs and alcohol for certain lengths of time. This type of therapy is shown to help reduce symptoms like hostility, depression, and emotional distress, making it easier for patients to cope with difficulties in sobriety.

One of the most popular therapies for addiction is cognitive-behavioral therapy (CBT). CBT is a form of talk therapy that helps patients develop important coping skills for long-term sobriety. This approach helps patients identify triggers and underlying conditions, work through their emotions, and cope with these emotions in the future. CBT can help prevent relapse, improve decision-making skills, and treat co-occurring disorders.[5]

Peer support groups, such as Cocaine Anonymous (CA) or Narcotics Anonymous (NA), are effective long-term recovery management solutions. After patients have finished detox and cocaine addiction treatment in New Jersey, they are encouraged to join a support group to participate in indefinitely. These 12-Step based programs promote fellowship and support among like-minded individuals who are all trying to stay sober.

Addiction to cocaine is a serious and potentially deadly problem that can impact nearly every part of a person’s life. Fortunately, comprehensive cocaine addiction treatment programs in New Jersey are equipped with the medical and clinical expertise necessary to help people overcome their difficulties.

If you or someone you know is addicted to cocaine, we’re here to help. Pick up the phone and call now to get started with a drug and alcohol treatment program near you.