How Long Does LSD (Acid) Stay in Your System?

Home » Blogs » How Long Does LSD (Acid) Stay in Your System? 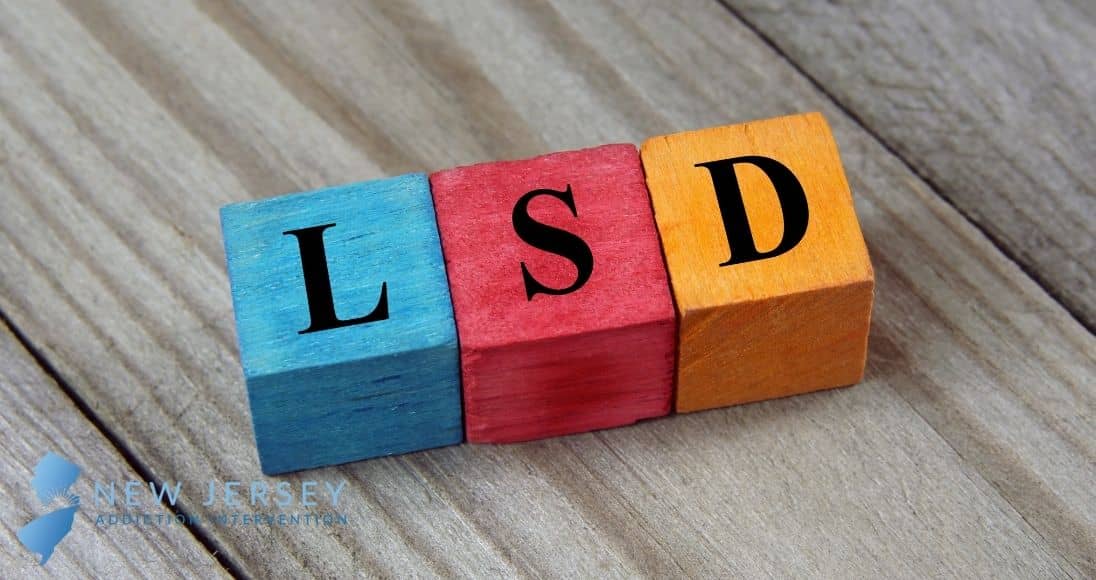 Lysergic acid diethylamide, commonly known as LSD or acid, is a synthetic hallucinogenic drug that can cause hallucinations, distorted perceptions, mood swings, and impaired judgment. The U.S. Drug Enforcement Agency (DEA) classifies it as a Schedule I Controlled Substance, indicating no accepted medical use and a high potential for abuse.[1]

LSD (acid) can be abused and lead to addiction. It can also have bad interactions with certain medications like antidepressants, SSRIs, and lithium.[2] More than 13.2% of adults use antidepressants, and antidepressant use is even more common in populations that struggle with addiction or substance abuse.[3] Since LSD can have serious adverse reactions with most antidepressants, knowing how long acid stays in your system can be extremely valuable information.

LSD or acid can be detected in your blood for up to 16 hours and urine for up to four days after the effects wear off. However, the urinary metabolite of LSD that is detectable on many drug tests, 2-oxo-3-hydroxy-LSD, can remain in your system for five days or more.[4]

How Long Do The Effects of LSD Last?

Acid usually comes in the form of blotter paper that contains droplets of liquid LSD. The blotter paper dissolves in the mouth and is absorbed into the bloodstream. The effects usually begin somewhere between 20 and 90 minutes after taking a dose, peak between two and five hours, and subside after eight to twelve hours.[5]

Common side effects of LSD include: 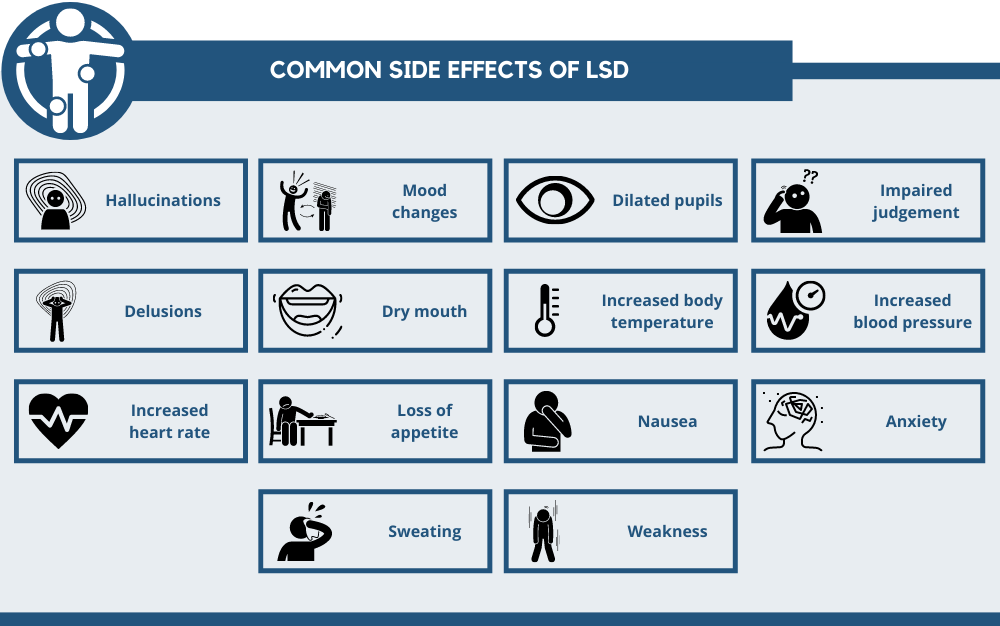 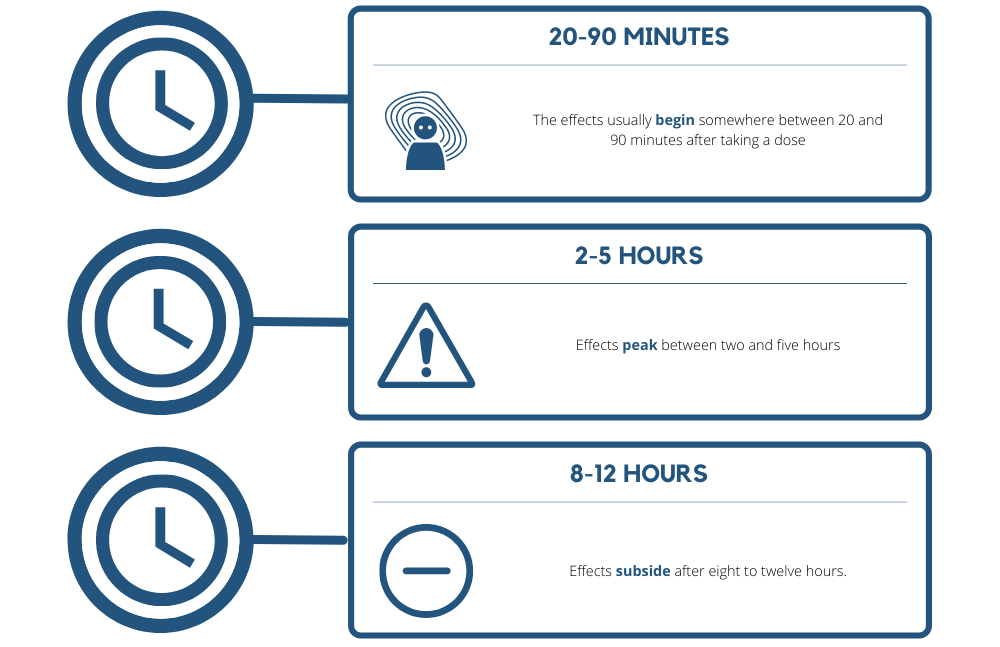 High doses of LSD can produce effects that last for up to 12 hours. After the effects wear off, it’s common to be unable to fall asleep and feel uneasy.

How Is Acid (LSD) Metabolized in the Body?

After it circulates through the bloodstream, LSD is absorbed in the digestive tract and is broken down by the liver. The liver breaks it down into several metabolites, with two of the most prevalent being 2-oxy-LSD and 2-oxo-3-hydroxy-LSD.

The elimination half-life of a drug is used to estimate how long it takes the body to metabolize and eliminate 50% of the drug. LSD has a half-life between 3.6 and 5.1 hours.[5] It takes four to five half-lives for a substance to be eliminated from your system, so it can take between 14 and 25 hours for LSD to clear your bloodstream. With that said, the metabolite 2-oxo-3-hydroxy-LSD remains detectable in your system for much longer.[4]

Factors That Influence How Long LSD Stays in Your System

Despite the relatively short elimination half-life of acid, there are various individual factors that determine how long the drug stays in your system. These include:

Can LSD Be Detected In Urine, Blood, and Hair Tests? 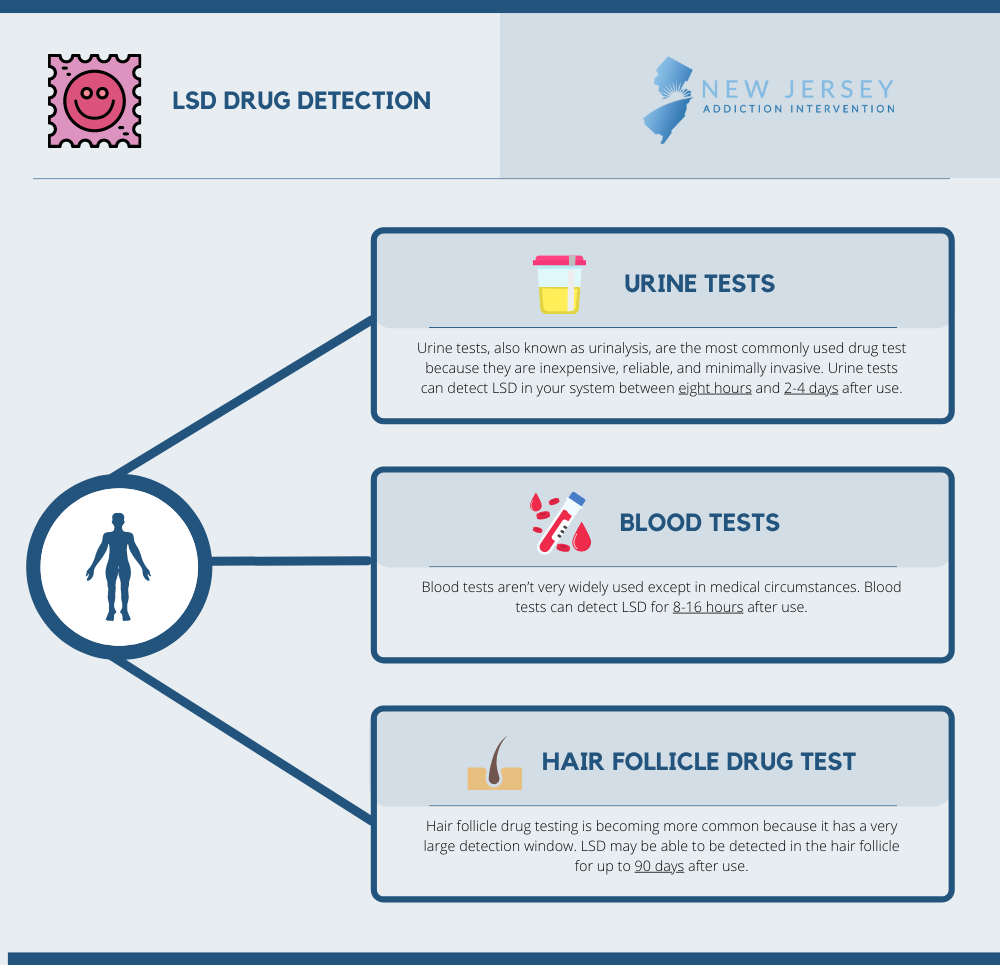 LSD can be detected in your body, however, 2-oxo-3-hydroxy-LSD is present in higher concentrations and can be detected longer in the body. This means drug screenings can tell when you have used LSD several days after the drug actually leaves your bloodstream.

The three types of drug tests that can be used to detect LSD include:

Urine tests, also known as urinalysis, are the most commonly used drug test because they are inexpensive, reliable, and minimally invasive. Urine tests can detect LSD in your system between eight hours and 2-4 days after use.

Blood tests aren’t very widely used except in medical circumstances. Blood tests can detect LSD for 8-16 hours after use.

Hair follicle drug testing is becoming more common because it has a very large detection window. LSD may be able to be detected in the hair follicle for up to 90 days after use.

Does LSD Stay in Your Spine After You Take It?

One common myth surrounding LSD is the idea that it stays in your spinal cord for months or years after you take the drug. This myth even expands to say that traces of LSD are released when you crack your back. However, researchers have proven that LSD is not found in the spinal cord.[6] Like all other drugs, it is eliminated from the body in the hours following ingestion.

Long-term LSD abuse can be addictive, though. It can also damage the brain, impair your attention span, and lead to a condition called hallucinogen persisting perception disorder.[7] This condition is characterized by flashbacks that can last for months or years after taking acid.

Long-term LSD abuse can harm your mental, physical, and emotional health. If you’ve found yourself unable to stop using LSD, it’s time to get professional help.

Our team at New Jersey Addiction Intervention is here day and night to help you work with your insurance, choose a rehab program, and begin your recovery journey. Call now to get started.

0 replies on “How Long Does LSD (Acid) Stay in Your System?”