Is Marijuana a Stimulant or a Depressant?

Home » Blogs » Is Marijuana a Stimulant or a Depressant?

Marijuana is the most commonly used illegal drug in the United States. Approximately 22.2 million people smoke marijuana each month.[1] Marijuana use directly affects parts of the brain responsible for learning, attention span, memory, decision making, coordination, and emotions. Depending on the specific strain of marijuana smoked, the dose consumed, and the individual makeup of the user, the effects of the drug can vary.

What is Marijuana Classified As?

Individuals experience and react to marijuana in different ways. Some people smoke marijuana and feel calm, relaxed, and content. Others get extreme anxiety and paranoia. Additionally, the amounts of THC and CBD (the two psychoactive chemicals in marijuana), the dose it is consumed in, and the method of administration are influential factors in how a person responds to the drug.[2] Some people experience stimulant-like effects when taking marijuana while others respond to the drug by becoming drowsy or tired. Each individual is different, and how they respond to marijuana may impact whether a person considers marijuana to be a stimulant, depressant, or hallucinogenic drug.

In many states, marijuana is legal for medicinal use. People who use medical marijuana do so for a variety of reasons, including:[3]

The purpose for which a person uses marijuana and the benefits they seek from it can also affect whether or not the drug is considered a stimulant or depressant. 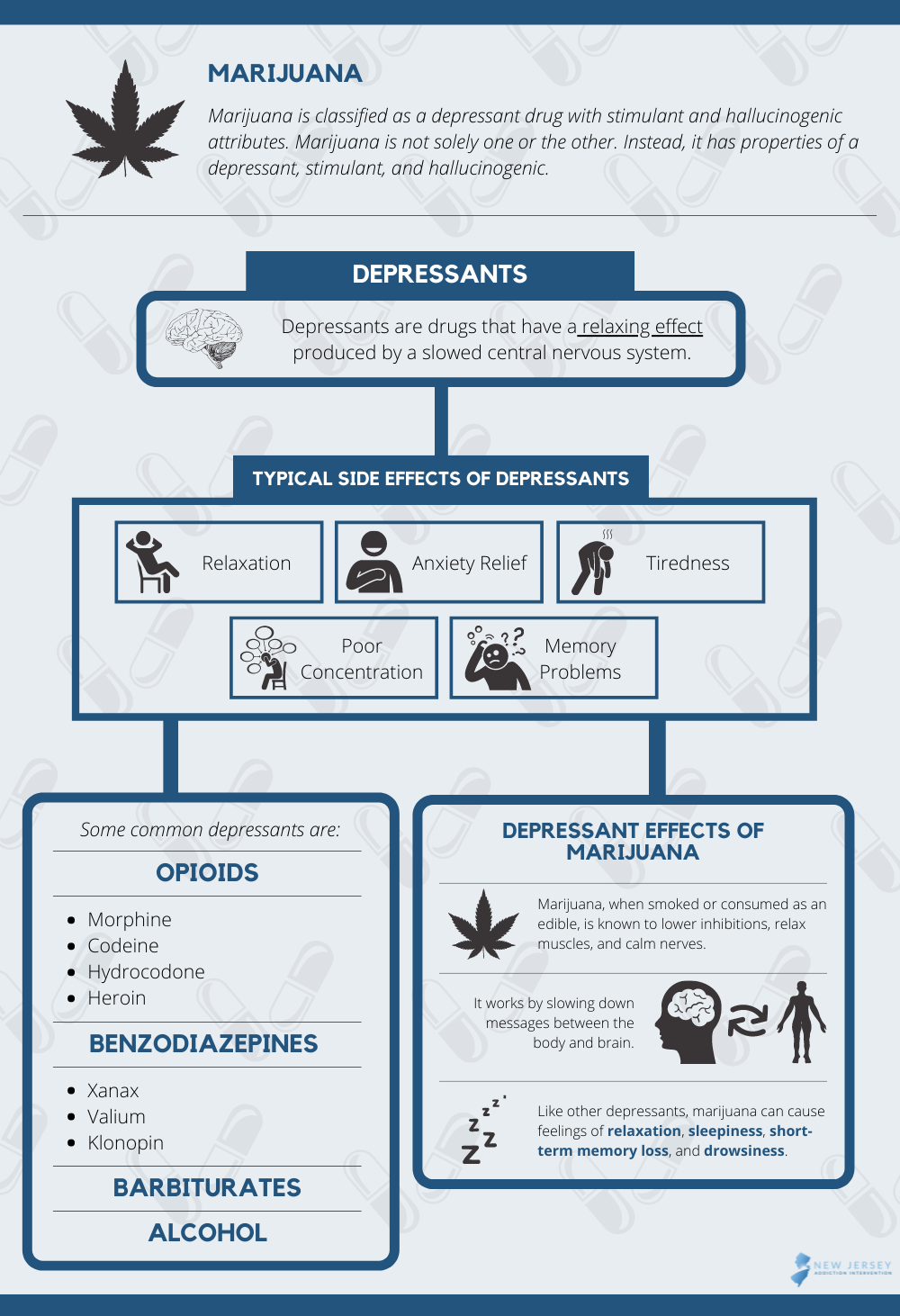 Marijuana, when smoked or consumed as an edible, is known to lower inhibitions, relax muscles, and calm nerves. It does this by slowing down messages between the body and brain.

Like other depressants, marijuana can cause feelings of relaxation, sleepiness, short-term memory loss, and drowsiness. 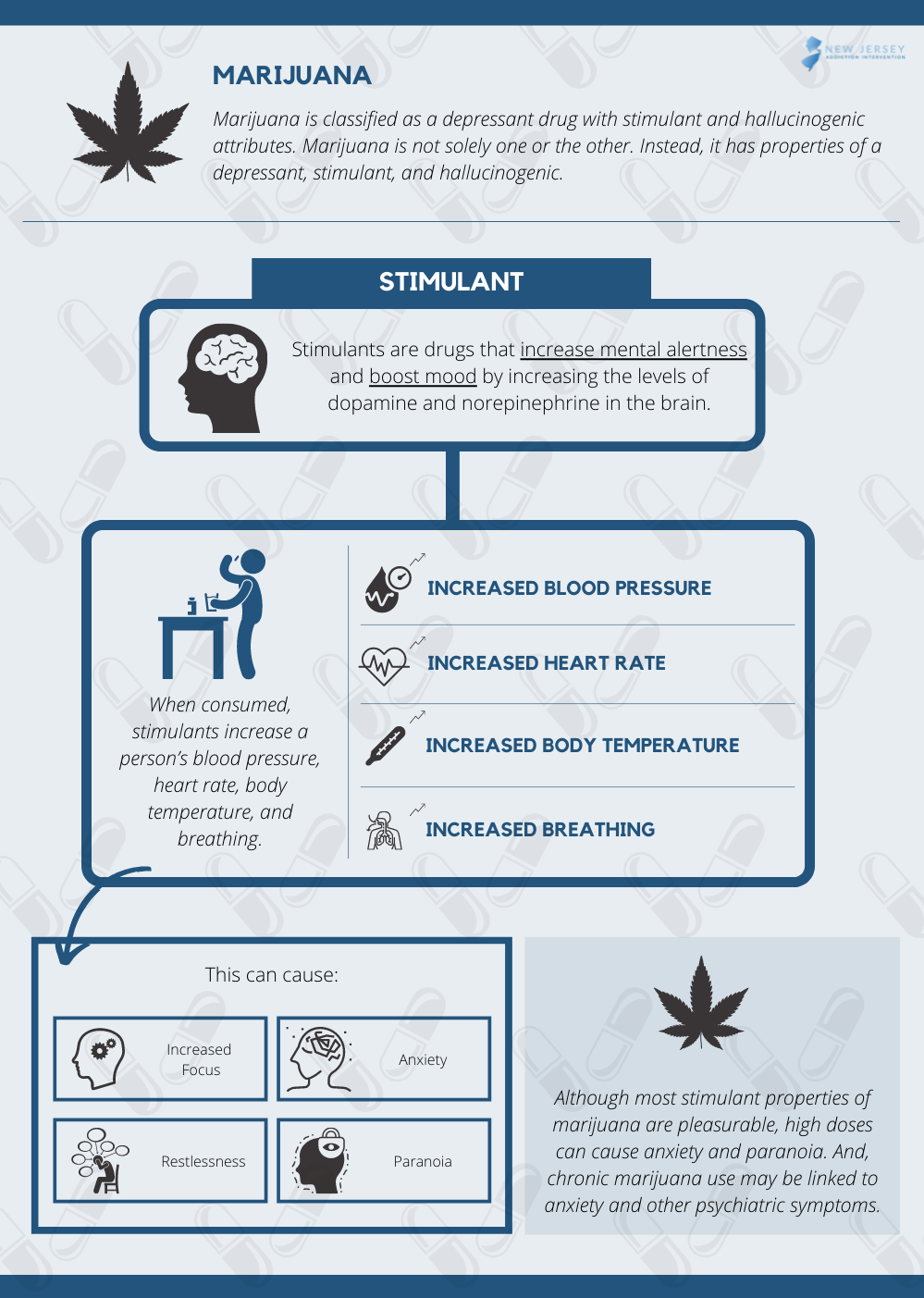 Many people use marijuana to improve their mood, fight off depression, and treat other mental health-related symptoms. Since the drug produces elevated mood, marijuana has stimulant properties.

Stimulants are drugs that increase mental alertness and boost mood by increasing the levels of dopamine and norepinephrine in the brain. When consumed, stimulants increase a person’s blood pressure, heart rate, body temperature, and breathing. This can cause increased focus, anxiety, restlessness, and/or paranoia.[5]

Although most stimulant properties of marijuana are pleasurable, high doses can cause anxiety and paranoia. And, chronic marijuana use may be linked to anxiety and other psychiatric symptoms.[6]

Marijuana is generally referred to as a hallucinogenic drug with depressant and stimulant properties because it alters a person’s senses. This is why people who smoke marijuana may laugh a lot or seem extra empathetic towards others.

Hallucinogens are drugs that alter a person’s perception of reality by causing distortions in audio, visual, and tactile sensations. These psychoactive effects are produced due to increased levels of serotonin in the brain. Some of the most popular hallucinogens are psilocybin mushrooms, LSD, and DMT.[7]

Marijuana, as a hallucinogen, can enhance users’ sensory perceptions, causing them to see colors more vividly, hear distorted sounds, and be more sensitive to touch. While these mild effects are typically pleasurable, others may be more distressing. Some individuals may experience a racing heartbeat, paranoia, and strong hallucinations.

Although cannabis is not as addictive as other “hard” drugs like heroin or methamphetamine, research suggests that 1 in every 10 marijuana users will become addicted. This number increases to 1 in 6 when looking at people who began using cannabis before the age of 18.[1]

Marijuana use disorder appears in a very similar way as other substance use disorders except the outcomes don’t tend to be as severe as they are with other drugs.[2] People who are addicted to marijuana will develop a tolerance, experience withdrawal symptoms when they aren’t using cannabis, and show patterns of compulsive and habitual drug use.

Help for Marijuana Abuse and Addiction

When used as directed for medical purposes, cannabis can be safe and effective. However, when abused, it can be addictive and habit-forming. If you or someone you love is addicted to marijuana, our team can help. Contact us today to see how we can assist you or a loved one in overcoming addiction.

0 replies on “Is Marijuana a Stimulant or a Depressant?”