Oxycodone vs. OxyContin: Is There a Difference?

Home » Blogs » Oxycodone vs. OxyContin: Is There a Difference?

The opioid crisis continues to take the lives of hundreds of Americans each day and is showing no signs of slowing down. The crisis is driven both by illicit opioids, like heroin and fentanyl, and prescription opioids such as hydrocodone, oxycodone, morphine, and codeine. Two of the most widely abused prescription opioids which have been at the center of the crisis are oxycodone and Oxycontin.

Both of these medications are frequently prescribed to treat severe, acute, and chronic pain despite how addictive and deadly they can be. In 2019, opioids were involved in more than 70% of all drug overdose deaths.[1]

Oxycodone is a semi-synthetic opioid medication that is partially derived from the opium poppy plant. It is prescribed in both hospital and outpatient settings to relieve moderate to severe pain.[2]

Oxycodone is the active ingredient in a number of narcotic pain medications, such as Oxycontin, Percocet, and Percodan. It is available in the form of a single-ingredient medication that only contains oxycodone or as a combination medication containing oxycodone and acetaminophen or oxycodone and paracetamol.

Single-ingredient oxycodone is sold under the brand names Oxaydo and Roxicodone. Both the name brands and generic forms are immediate-release medications that alleviate pain. They are often used to treat pain associated with surgery or from a severe injury.

OxyContin is a brand-name drug that contains a time-released version of oxycodone that has found itself at the center of national controversy. It was originally approved to treat moderate to severe pain on a long-term basis. The manufacturers of OxyContin, Purdue Pharma or the Sackler family, originally marketed this medication as non-addictive. However, OxyContin quickly proved itself to be one of the most addictive opioids out there.

Purdue Pharma claimed that OxyContin, due to its extended-release formulation, would be less appealing to addicts and more difficult to abuse. Drug users quickly realized they could dissolve the time-release seal with their saliva, giving them access to the full dose of oxycodone at once.

Eventually, OxyContin was at the center of various lawsuits and litigations, and Purdue Pharma had to pay millions of dollars to various states across the nation for settlements regarding their false claims about the drug.[3] Today, OxyContin is prescribed sparingly, and it is only approved to treat severe pain.

What is the Difference Between Oxycodone and OxyContin? 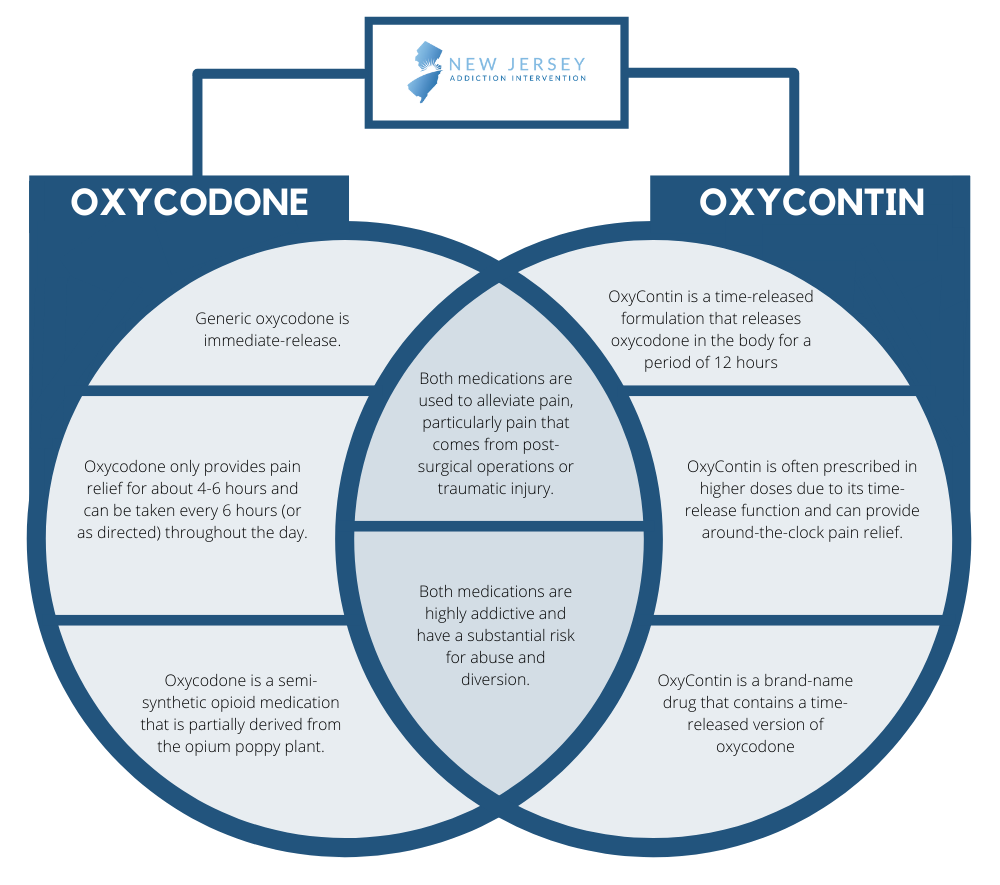 OxyContin is often prescribed in higher doses due to its time-release function and can provide around-the-clock pain relief. Oxycodone, on the other hand, only provides pain relief for about 4-6 hours and can be taken every 6 hours (or as directed) throughout the day.

Both medications are similar because they are used to alleviate pain, particularly pain that comes from post-surgical operations or traumatic injury. While the medications can be safe and effective if taken as prescribed for short periods of time, they are both highly addictive and have a substantial risk for abuse and diversion.

Is Oxycodone or OxyContin More Addictive?

Unfortunately, due to the potency of oxycodone, both the generic version and OxyContin are highly appealing to drug users and people with opioid use disorder. The high produced by oxycodone is comparable to heroin. In the Appalachian region of the United States, oxycodone is even referred to as “hillbilly heroin.”

When people take opioids, they experience a release of feel-good chemicals in their brains. Over time, the brain gets used to these chemicals, and it requires more and more of them to feel normal. As the brain requires more of a substance, users often increase their dose to try and feel the same effects as they did before. This pattern of substance abuse is referred to as tolerance.

Once individuals develop an opioid tolerance, they may begin craving the drug. They may even develop a physical dependence after taking the drug regularly. This results in withdrawal symptoms when the person tries to stop taking an opioid. Many opioid users will continue taking opioids, even if they want to stop, simply to avoid getting sick with withdrawal symptoms.

Both oxycodone and OxyContin are equally addictive. People can become addicted to taking these medications in as little as one week.

If you or a loved one are struggling with opioid addiction, there is help available. Pick up the phone and call us today to speak with a dedicated addiction specialist about your opioid treatment options in New Jersey.

0 replies on “Oxycodone vs. OxyContin: Is There a Difference?”